skip to main | skip to sidebar

Fox under the moon 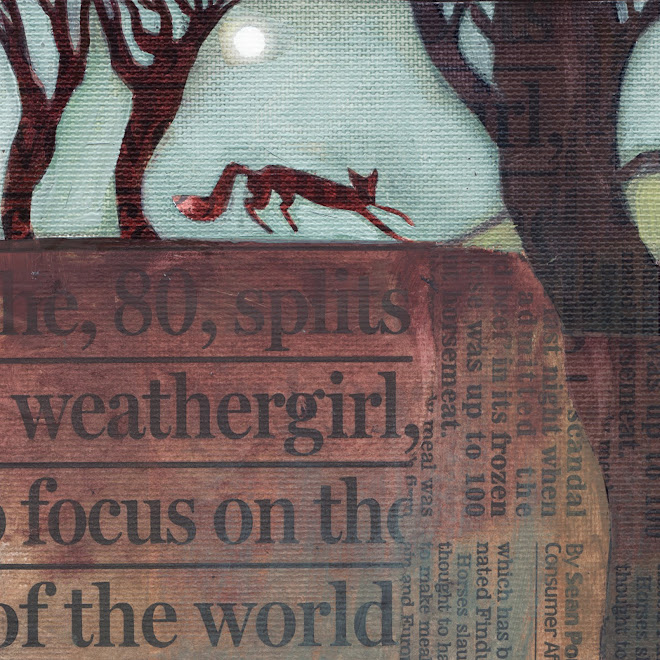 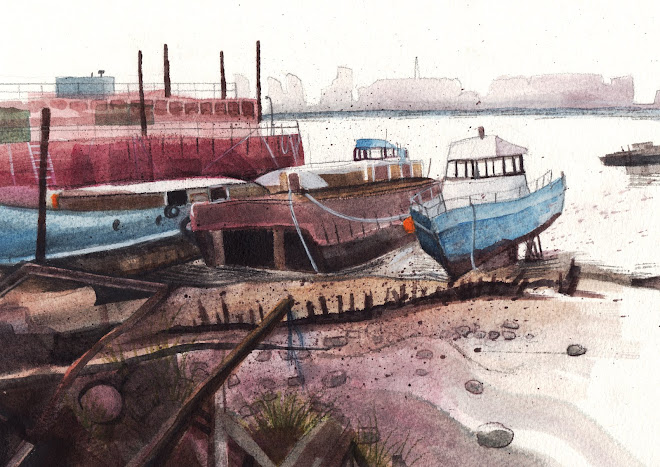 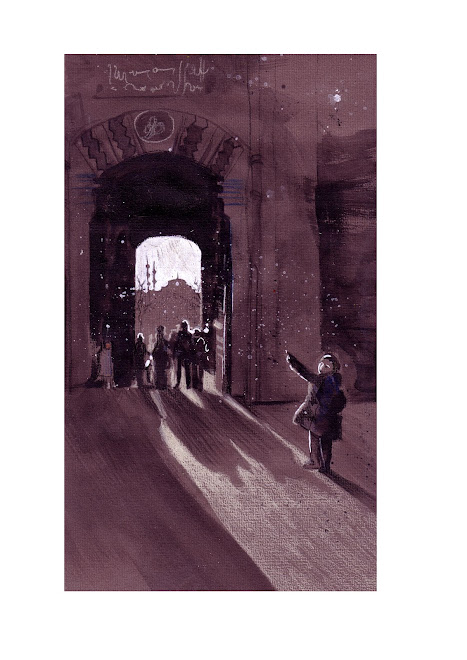 Through the gate you can see the Blue Mosque. 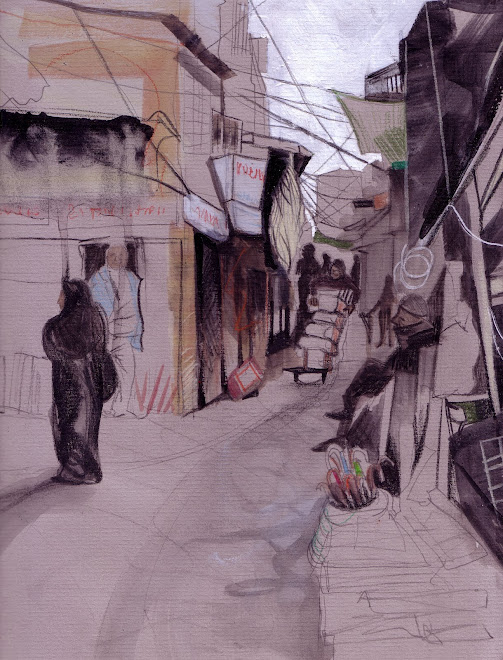 A fabulously scruffy Turkish street. Haven't yet finished, but I won't add much more... 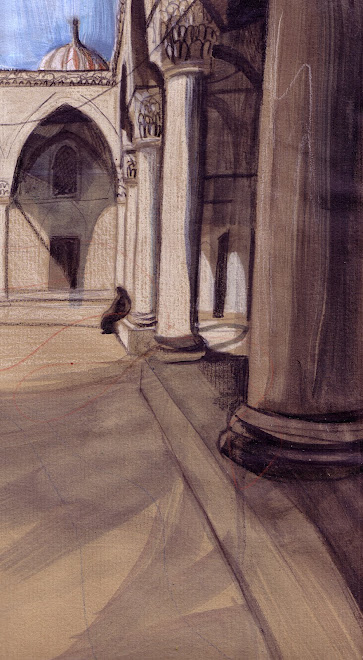 A beautiful mosque on the Asian shore. 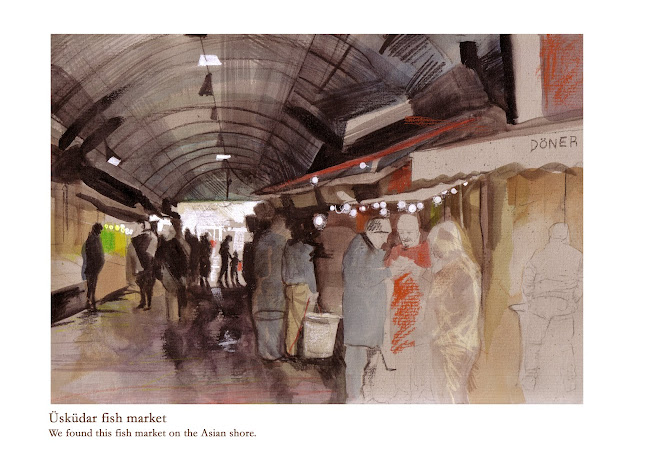 We found this market on the Asian shore of Istanbul. 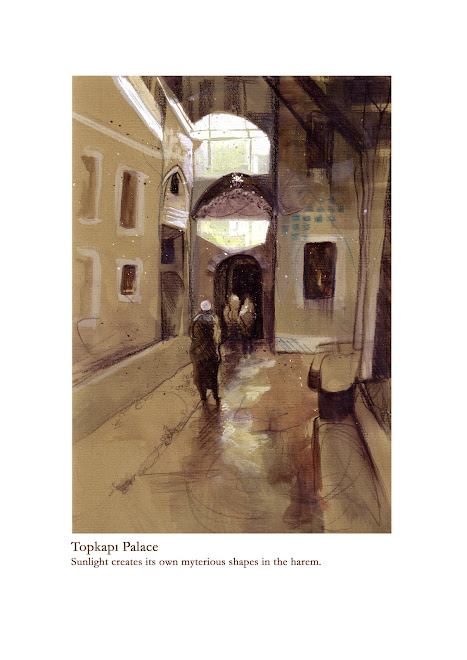 A view of the harem at the Topkapi Palace. 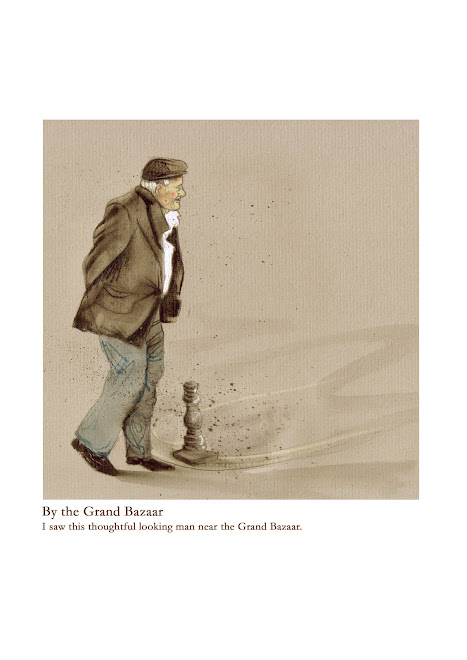 A thoughtful looking man near the Grand Bazaar. 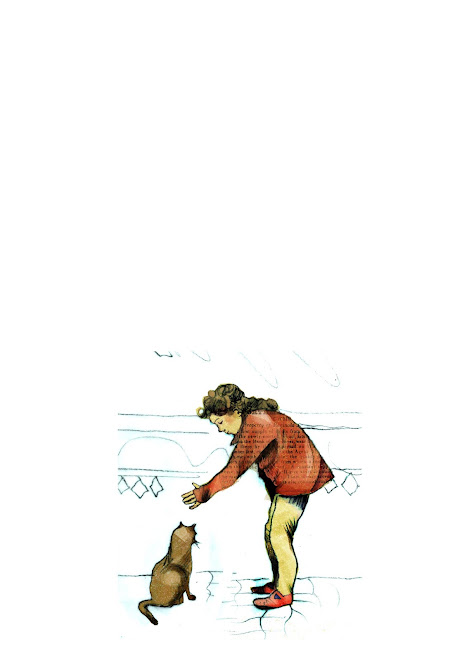 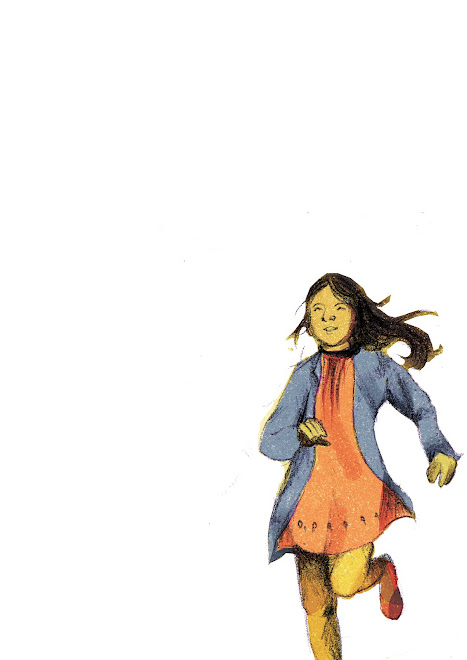 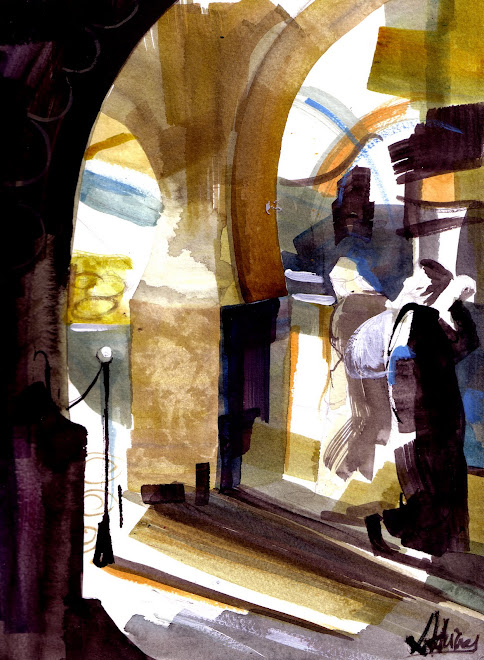 The light falls through the arches onto jewels and treasures 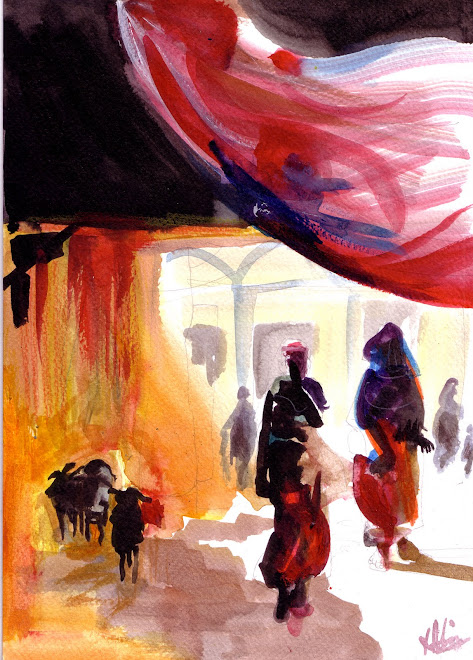 Goats along a dusty derb

Dyer's Souk in Marrakesh - has a long and complicated name! 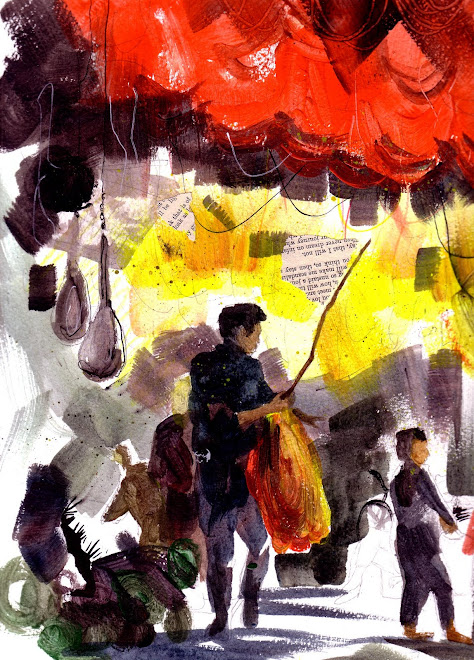 We actually didn't find this much colour!

Woman sitting infront of a mosque (not really in the shade) 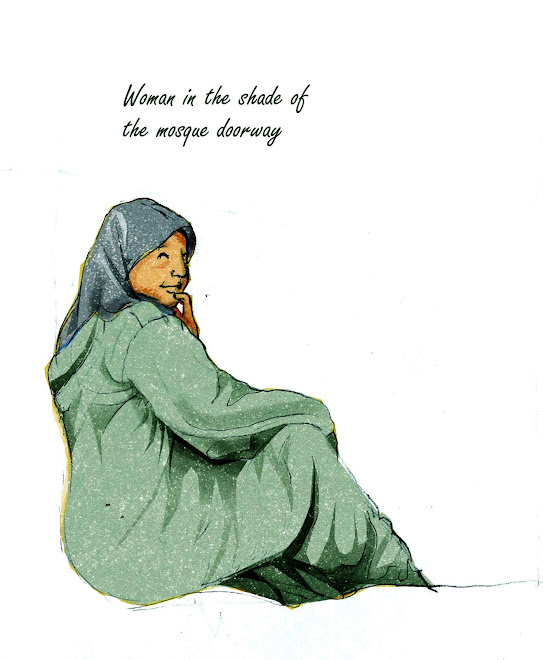 Just have to add the mosque! 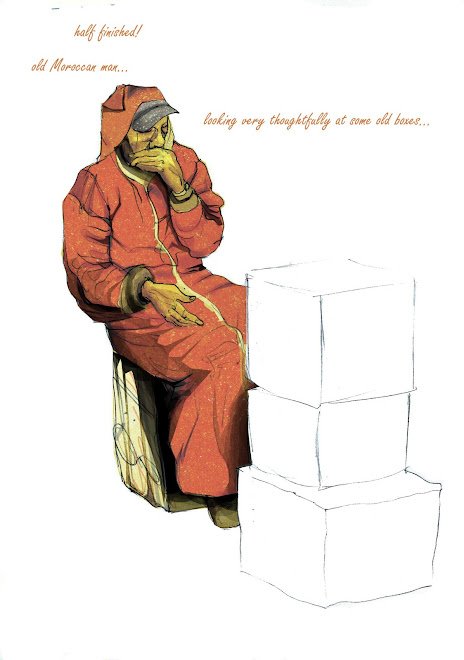 The boxes haven't yet been added! 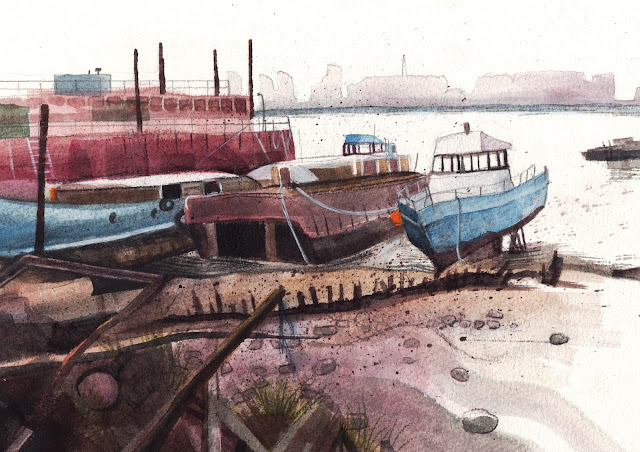 I love the fabulous cluttering and scruffiness of streets abroad.  Turkey and North Africa have given me so many opportunities for sketching, which I have not yet fully exploited - and I hope to try oils as well as acrylics.  I want to travel to India too - I would love to do an Indian inspired sketchbook!  And Egypt and Cambodia, and maybe Central America too!
Posted by Laura at 15:07 No comments:

I am hoping to produce small books of walks/strolls through different parts of London. I was thinking of starting with the Southwark book that I did ages ago and moving on to my City of London walk afterwards. Names include...

My original Southwark book was called Dancing Monkeys, Dirty Bishops and Debt Collectors: A Walk Through Southwark - too long a title?

In a week's time, Wesley and I will be embarking on an adventure to Turkey. I am hoping to get some good photographs of street traders and people going about their daily lives in the bazaars and souks. Istanbul (originally the Byzantine capital Constantinople) has always been a treasure trove of cultures and religions. We are lucky enough to be visiting the city with the South Midlands Museums Federation, and will be exploring the city's museums and sites with like-minded people. It will give us a fascinating insight into the lives of people from the archaeological past to the present day and their culture, art, architecture, food and beliefs etc.

I am really looking forward to sampling the traditional food of Turkey - my only experience is at a lovely Turkish restaurant in Brick Lane and one in Marylebone. I am hoping to stock up on Turkish Delight - I seem to be the only one who likes it - all the more for me!
Posted by Laura at 10:13 No comments:

Wesley and I walked in the footsteps of thrifty Victorian mudlarkers as we explored the North Thames shoreline just to the right of London Bridge, parallel to Lower Thames Street. Here for a few hours, the small, modest beach (if it can be called that) provided a wealth of interest. Perhaps the thing we noticed the most was the sheer amount of oysters - presumably from the days when they were commonplace. That, and clay pipe stems; I was excited by my first one, but I was soon chucking them away in hope of finding something more.

The next day we returned to the foreshore just off Wapping High Street - we had planned to follow the tide as it went out, but we were a bit late so had less time to search for objects. Other places we have explored include the 'beaches' of North Greenwich and further into the centre of town by the Tate Modern. However the places where we found most 'stuff' (I refuse to call it rubbish!) was on the northern banks of the river.

Items from Wapping and the City include an old 'angry face' from a Bellamine witch bottle (16th/17th century?) and many clay pipes. The earliest clay pipes seem to have a small bowl and have little decoration. Our later (19th century?) pipes had beautiful leaves decorating the bowl and small initials (of the maker?) on them.

The intimate views of the city from the Thames shoreline in the crisp January weather were stunning. Being at the same level as the water made me wonder who would have been upon the shores of the Thames in the past, and what might they have seen? It was far more magical than viewing the river from a bridge or embankment, or even a boat. The metal barges docked in the river rattled together and made great booming sounds, their chains and ropes collecting a treasure trove of bits of pipe, china, glazed ware and shingle. I ended up extremely muddy. Wesley managed to avoid the mess I was making - as he somehow always does!
Posted by Laura at 09:46 No comments:

I have only a couple of weeks before embarking on my journey to Istanbul with Wesley - so I have been looking back through past pictures of Marrakesh and Tunis to give me some inspiration for any paintings and drawings that I can do. I have been experimenting colouring in on Photoshop which is a lot less messy! I have been using textures kindly given to me by Wes. I'm going to see if I can post them on this blog, but I have a feeling it might be too technical for me...
Posted by Laura at 09:20 No comments: